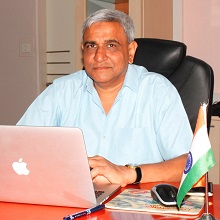 Prof. Ravi Shankar Nanjundiah has joined IITM as Director w.e.f. 02 March 2017. Before joining IITM, he was Chairman of the Centre for Atmospheric and Oceanic Sciences at the Indian Institute of Science (IISc), Bengaluru.

Prof. Ravi worked on thesis entitled ‘Study of Intraseasonal Variations of the Tropical Convergence Zones in a Simple Monsoon Model’ and obtained his PhD in Atmospheric Sciences from IISc, Bengaluru in 1992. Dr. Nanjundiah did ME (Mechanical Engineering) from IISc, Bengaluru in 1986. He obtained his BE (Mechanical Engineering) degree from Rani Durgavati University, Jabalpur in 1984. Study of Monsoon and its variability using climate models, application of High Performance Computing/Grid Computing for climate and weather-related studies, and use of Machine Learning Techniques for Monsoon prediction and downscaling are his key areas of interest. He has worked extensively on the different aspects of the Indian Summer Monsoon.

Prof. Nanjundiah has many awards and honours to his credit. A few to mention are: Nvidia Innovation Award 2013; Adjunct Faculty, ICTS-TIFR 2011-2014; Associate Editor, Journal of Earth System Sciences (published jointly by the Indian Academy of Sciences, Bangalore and Springer), 2008-2014; and Sir CV Raman Young Scientist Award for the year 2000 in the field of Earth Sciences. He is also a Member of the Editorial Advisory Board of Dynamics and Statistics of the Climate System (a new journal recently launched by Oxford University Press).

Prof. Nanjundiah started his research career as a Post-Doctoral Fellow at the Mathematics and Computer Science Division of Argonne National Laboratory, USA. He worked there in the CHAMMP (Computer Hardware, Advanced Mathematics and Model Physics for studying global change) project during February 1993-February 1995. Then, in July 1995, he came back to India and joined the Centre for Atmospheric and Oceanic Sciences (CAOS) at IISc, Bengaluru as an Assistant Professor. At CAOS, he continued his successful story and grew to become Associate Professor in July 2001, Professor in July 2007 and the Chairman of the Centre in December 2013.

Prof. Ravi has been active in human resource development and so far, has guided 08 PhD, 04 M.Sc. (Engg.) and 08 M.Tech. students and is currently guiding 07 PhD and 01 M.Tech. students.

He has 70+ peer-reviewed publications in national and international journals and has presented at many conferences.

For the complete profile of Prof. Nanjundiah, please click here.