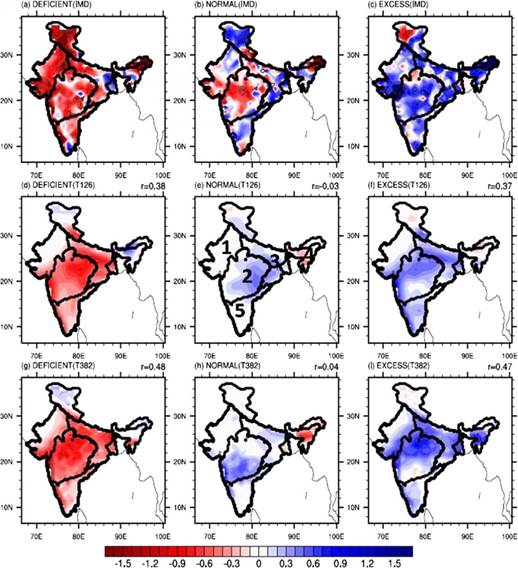 Fig 1:  Seasonal rainfall anomaly composites for deficient, excess and normal years for observations (a–c), T126 (d–f) and T382 (g–i). Geographical locations of 5 homogeneous regions of India are marked in (e). Pattern correlation between model and observations is included in top of each model plots (d–i).

Why potential predictability and actual skill of ISMR is higher for Feb IC hindcasts in CFSv2-T382 ?: Role of initial SST error and teleconnectios

Both actual and potential skills (calculated using relative entropy, RE) of CFSv2 hindcasts increase as lead time decreases for Niño3 index and equatorial East Indian Ocean (EEIO) SST anomaly and both the skills are close to each other for May IC hindcasts (zero month lead). At the same time the actual skill of ISMR and El Niño Modoki index (EMI) are close to potential skill for Feb IC hindcasts. It is interesting to note that, both actual and potential skills are nearly equal, when RE has maximum contribution to individual year’s prediction skill and its relationship with absolute error is insignificant or out of phase. In CFSv2 hindcasts, the major contribution to potential predictability is from ensemble mean and the role of ensemble spread is limited in CFSv2. The study address the reason for higher actual skill of ISMR in Feb IC, eventhoguh the SST boundary forcing have better skill for May IC hindcasts. For Feb IC hindcasts, initial month SST (Feb SST) has important predictive component for El Niño Modoki and ISMR leading to higher value of actual skill which is close to potential skill. Thus even though the simultaneous relationship between ensemble mean ISMR and global SST is similar for all ICs, the predictive component from initial SST anomalies are captured well by Feb IC (3 month lead) hindcasts only. In Figure 2 below, Feb IC has same pattern for initial SST relationship in observations, RE and ensemble mean. Meanwhile in observations and RE, by May IC, the initial SST pattern is weak, while it is like a strong La Nina in ensemble mean.  Lack of proper contribution from initial SST and teleconnections induces large absolute error for ISMR in May IC hindcasts resulting in very low actual skill while the error is minimum and has maximum skill for Feb IC. Thus the use of potential predictability skill and actual skill collectively help to understand the fidelity of the model for further improvement by differentiating the role of initial SST and simultaneous boundary forcing to some extent.

Figure 2:Correlation between observed ISMR and observed initial SST anomalies for a Feb, b March, c April and d May initial months. e–h are same as a–d, but the ISMR is prepared from CFSv2 T382 hindcasts initialized from February to May initial conditions respectively. i–l are same as e–h, but corresponding RE values are used instead of ISMR from CFSv2 hindcasts. All the values above 90% significant levels are represented in contours

The correct representation of cloud condensate vertical profile and  stratiform/convective rain are crucial for the better simulation of excess and deficient monsoon, which may further improve the variability of Indian summer monsoon in coupled climate model. Further the study connotes the urgent need of the improvement of cloud parameterization in coupled climate models for the betterment of monsoon variability and realistic representation of deficient/excess monsoon rainfall patterns over Indian subcontinent. 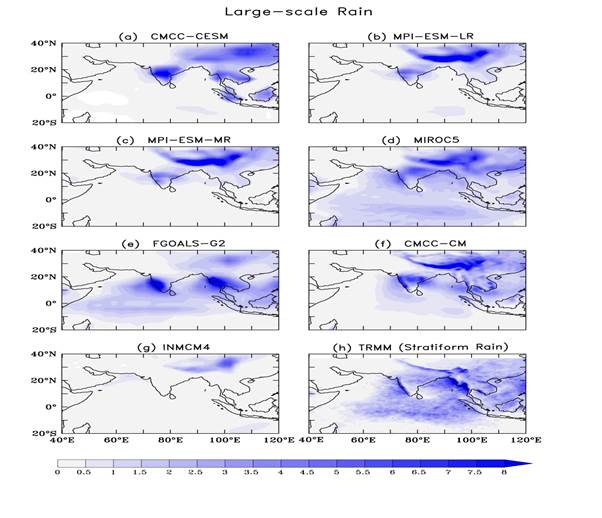